Luv Is 4ever Tour 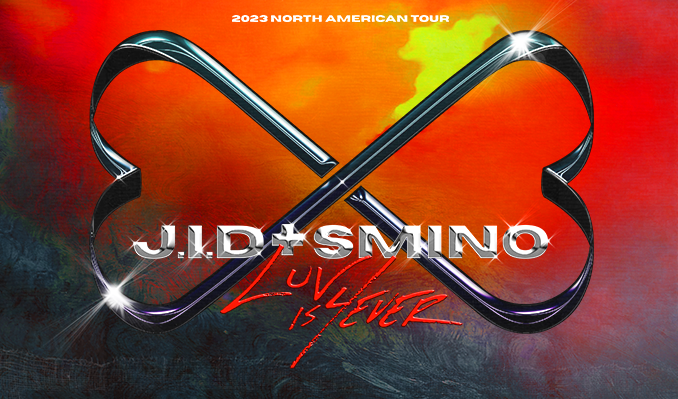 Being keenly aware of his situation has always paid dividends for J.I.D. The East Side Atlanta native went to Hampton University in Virginia on a full football scholarship. But once he started playing at the prestigious HBCU, J.I.D. realized he may too small to make his NFL dreams happen. He was disappointed, but saw an opportunity.

With Atlanta’s robust music scene as a backdrop, J.I.D. had already dabbled in making music and had gotten an overwhelmingly positive response to his first recording over Bun B’s “Pushin” back in high school. So he decided to make a mixtape. “It was crazy,” recalls J.I.D., who got his moniker from his grandma, who used to call him ‘Jittery.’ “We had hella dope songs on there and we got buzz around the campus. Kinda like what happened in high school happened again. That’s when I realized I had an idea of how to do this.”

As his campus rep grew, J.I.D. met and connected with fellow ATL transplants EarthGang at school, and started doing shows with them. When he moved back home, J.I.D. helped form the Spillage Village collective with EarthGang (who had also relocated back to Atlanta), producer Hollywood JB, Jordan Bryant and DJ DarkKnight. His Para Tu mixtape, which boasts the revered cut “Proverbs,” arrived in 2013.

Steady on the grind, J.I.D. kept recording, networking and performing. His February 2015 mixtape, DiCaprio, was inspired by the acclaim J.I.D. felt the actor was lacking. “Leo wasn’t getting any type of recognition, and I felt like I wasn’t getting acknowledged in my field either,” J.I.D. explains of the project, which showcased his burgeoning lyricism and storytelling skills. “I used different phrases and quotes from his movies in the mixtape, stuff that could get my thoughts out about being an underdog. That’s how I always felt being the youngest, but I knew one day that would change.”

The 25-year-old’s big break came organically. While on tour with EarthGang, who was opening for Dreamville artist Ab-Soul, J.I.D. met and developed a relationship – a brotherhood, really – with J. Cole, one that eventually led to J.I.D. signing to the North Carolina rapper’s imprint.

“Cole is somebody who’s been doing what I’m trying to do and he’s a big part of helping me out right now,” J.I.D. says. “I already had my music ready, but he gives opinions and critiques and helps me fine tune it because he knows where I want to go and he understands what I want to do in the music. He’ll come back and ask me, ‘What is the message you’re trying to tell?’ He’s really big on making sure I portray my story right.”

The next set of stories J.I.D. will be telling are on his forthcoming Never: Chapter 1 EP.
“It’s all about where I’ve been and how I’m leaving that area of my life and trying to
make everything better,” he says. “Growing up in a big family and being the last, just
sucked! This EP encapsulates how it felt.”

The frenetic lead single “Never” explores what it feels like when you’ve been deprived of
everything you want. “I feel like a lot of people will like ‘Never’ because the messaging
is not real flashy,” offers J.I.D. “I’m upset that I don’t have these things but at the end of
the song there’s a brighter transition that let’s you know there’s hope for the future. The
transition in that song is real special.”

Elsewhere, “Hereditary” showcases producer HalfTyme Slim’s musical chops and
J.I.D.’s storytelling skills. “This song is about stuff I’ve been through with women in
my past, being hurt and the lessons that you learn,” J.I.D. says. “It’s a beautiful song, I
think. I hope people put respeck on it like it deserves.”

“I want people to understand the struggles I’ve been through to get where I am today,”
J.I.D. reveals. “Not so much the comfortability but the peace of mind. I want to show
people what you can accomplish when you step outside of your comfort zone and try to
better yourself. Mine, is a common man’s story. This is a hopeful project.”

YouTubeTwitterMore InfoFacebook
*Service and handling fees are added to the price of each ticket.